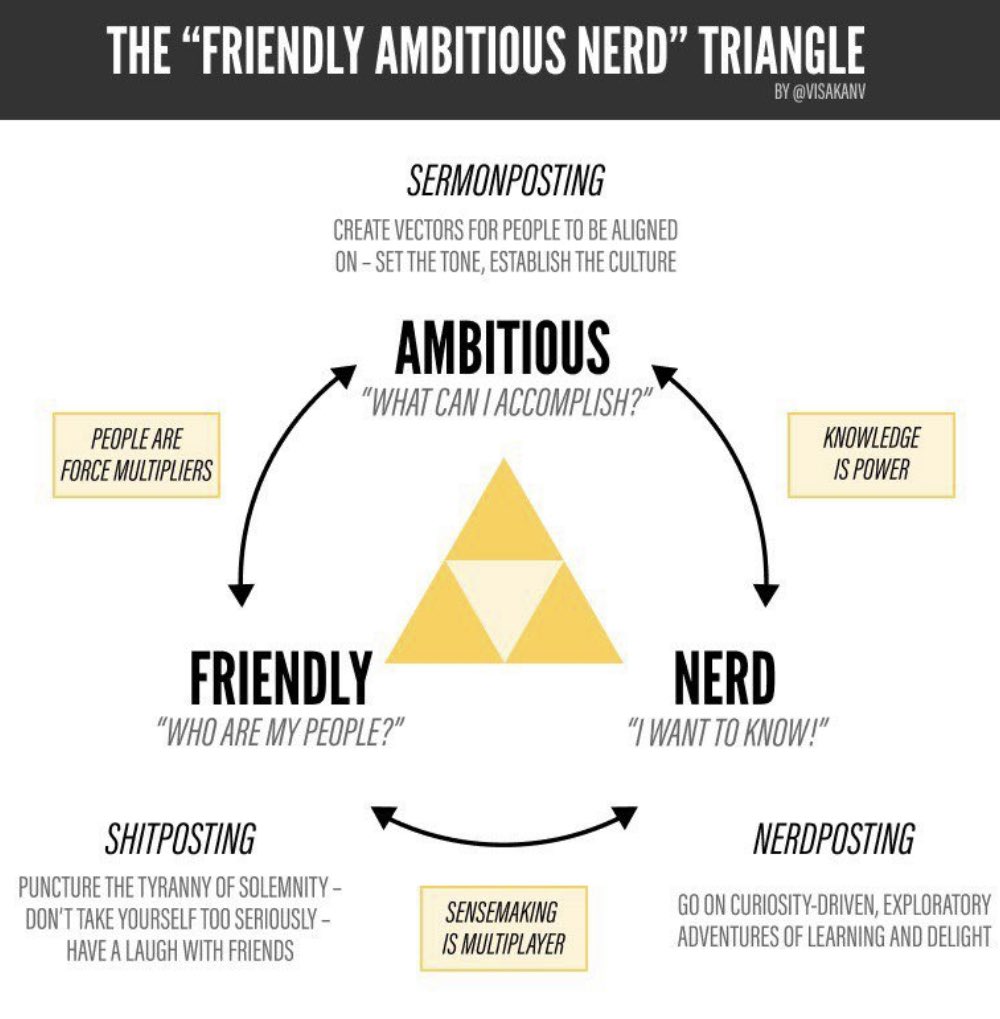 1-page summary of the whole book

FRIENDLINESS​ is about being a nourishing presence

cherished asset in any social space

AMBITION ​is about daring to dream bigger. It’s about realizing that you can live a much “larger” life

Ambition to me is about wanting to do more, be more, see more, learn more, know more. It’s about recognizing that ​your own imagination is a bottleneck that limits the amount of good you can create in the world

NERDINESS​ ​is about cultivating taste and curiosity. It’s about ​developing the courage to be honest with yourself about what you find interesting

the helm of the arse gods

One day, somebody joked in a thread that they got a rare magical helmet called the “Helm of the Arse Gods”. His sarcasm must have been obvious to everyone else, but being a clueless kid eager to impress others, I lied and said I got it too. I was like… 10. Everyone cringed and laughed at me.

I would learn how social points are scored

To me it became a game. I started to believe that every community could be “cracked”. I became a three-time ​Quora Top Writer​. I got a blogpost to the ​front page of Hacker News

I was especially determined to avoid faking or lying, since that’s what got me in trouble in the first place. Rather, I taught myself how to present a genuine version of myself that’s compelling to people. (authentic)

the meaning of life is friends

Make friends” is maybe the simplest two word directive in my memespace that has the most influence on everything else. To make good friends you have to be kind, interesting, sensitive, ethical

We are social creatures, and might as well get good at it.

be friends with yourself

Much of self-improvement, personal development, introspection and so on can quite simply be reframed as ​the art of socialising with yourself​.

If you can laugh, you can crack the solemnity that traps you in “woe is me”.

Circling back to "active listening"

This is true for regular conversation too, and I think it’s true of comedy, wit, and of business – IMO I almost always want to be willing + able to drop my current routine/pattern instantly in order to respond quickly and nimbly to what’s in front of me

I find myself thinking about Pixar’s Braintrust. It’s a sort of council of storytellers who provide advice and support to whoever’s working on a story. They understand that ​ideas in their formative stages are precious, fragile things​, like babies

The creation and maintenance of scenes

scenes seem to need like maybe around 2 dozen people. You need the conflict and collaboration and one-upmanship to push people far out of homeostasis

Ambition is not about accolades

Prince was a classic example of an ambitious person

Imagination deficits rule everything around me

It can be helpful to do thought experiments where you “invert” things. How would you think, how would you act, if this came easy to you? If you were good at it? If you knew in advance that you would succeed?

You are likely under-imagining what you can become capable of.​

Be so prolific you don’t recognize yourself

You have a far greater shot at tasting greatness and fun if you simply write as much as you possibly can, and then some. (making)

seeking new friends is an ambitious thing to do

To meet any person, find out what they want, and make it.

Optimize for referrals​ – rather than try to meet 100 new people blind, meet the 100 or so people you already know, identify the best 5-10 of them (whatever that means to you), and then develop yourself so those people refer you to their friends

how do you win the love, trust, support & goodwill of smarter people, so that THEY are on YOUR side​?

You can’t think your way out of a courage deficit

The challenging thing is that you can get addicted to intermediate steps that are genuinely helpful, eg part of my ​picky eater journey​ meant that I was watching a bunch of videos about food preparation, I could’ve ended up just watching videos for years.

The important thing is to take the next step.

Be wary of hotheads

hothead ambition is something I’m wary of

friend: I’m going to be a fucking millionaire in 3 years, watch me me: ah... u ok tho? who hurt you

Cultivate and gratify your taste

If you want to write well, I think you may need to spend more time identifying good writing than actually writing.

Once you know what smart writing looks like, forget about it. Forget about trying to look or sound smart. It rarely happens when you want to

Which brings us to dumb tweeting! All you have to do is to follow your nose (which hopefully has been honed over time from evaluating everything that comes your way). There’s almost always something interesting about everything if you find the right angle on it. (twitter)

you don’t actually need to find the smart angle! Writing is cheap, basically free. Write all the angles

Develop your taste 2. Produce a large volume of work, non-judgmentally, with the intent of having fun and pursuing your curiosity rather than trying to be smart 3. Edit 2 based on 1 4. Congrats, now people think you’re smart

“I’ve made a bunch of stuff but I still suck.”

This is a feature, not a bug. Welcome to the creative life! Everybody struggled with this. It’s what made them good. Keep making more stuff. When in doubt, make more stuff. (Quantity Beats Quality)

A lot of the fun of making stuff is playing with other people. A lot of my personal favorite tweets were written in response to friends mucking around.

if you challenge yourself to be precise in your language, and precise in your thinking, you will find yourself becoming increasingly effective as an individual. You start achieving your goals more, you start seeing things more clearly.

How I deal with my ADHD

To have ADHD, in my view, is to be blessed & cursed to be the custodian of a wild trickster (hacker) spirit who refuses to be tamed, broken, refuses to obey anybody else's directions – including your own. You can't win, so you might as well accept your fate and go along for the ride.

Which isn't to say that you don't have to care about your worldly responsibilities.

But if you take care of your shit, if you don't get grumpy and upset and grovel, if you ​don't resent the wild child inside you​ – then you get to experience the blessing

keep meticulous notes of whatever you do when you’re procrastinating. I think of it as “deep-self-directed work”. If you’re going to watch trashy movies then write down your thoughts after watching each movie (deeper interstitial journaling)

Move fast, hit hard, wipe quick and move on to the next thing, but be micro-rigorous in making sure that each new thing quickly considers all past things, and is threaded accordingly.

By "properly threaded" I mean contextualized against everything else that I'm doing, plotted on the map of my body of work. (threading)

Some parts of social reality are very hard to escape

On the other hand, limiting beliefs are sometimes shackles that you can shake off just by finding out what they are

how I choose to interact with my own heroes, too. Rather than gush at them excessively (which then becomes something that they have to manage), I thank them as calmly as I can, and let them know that their work has passed through me and is now helping other people in turn